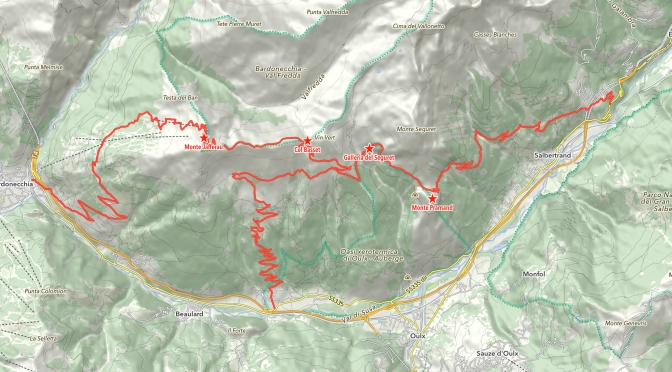 One of the most popular destinations for enduro riders in Piedmont is Monte Jafferau with its summit fortress. There are several ways to get there, including from Salbertrand and Savoulx. Fort Pramand is on the route below the summit of the same name.

The heavy rainfall in spring 2008 left clear traces on the route in the form of breaks and erosions, which made it impossible to drive on the route with multi-lane vehicles. In the meantime, however, the worst damage has been repaired, and the entire Pramand – Monte Jafferau – Fort Foens route was re-graveled and groomed in 2009 with considerable effort. Around the Batteria Jafferau the route was pushed further so that the descent over the ski slope of Bardonecchia would theoretically be possible even with large vehicles. From the newly created parking lot on the summit, narrow vehicles can still be driven up to the roof of the old fortress.

In 2013, there were major eruptions in the ceiling of the halfway tunnel »Galleria Monte Seguret«, which was then temporarily cordoned off. Since this barrier was cleared aside and ignored within a short time, the responsible municipality had the tunnel portal blocked with a half-height wall in 2014, so that it was no longer possible to drive from Salbertrand. The tunnel was only released again in 2018 after securing work.

During the Stella Alpina event (first weekend in July) hundreds of enduro riders will gather on the close by Rifugio Scarfiotte and many of them will attack the summit during the weekend.

We are trying to keep this website up-to-date with high quality content and free of any advertisement or subscription fees. But this is an expensive endeavour. Please consider making a contribution, it will be really appreciated and will help us to produce more content.

Thank You very much!

*Disclaimer:
The GPX file provided is free of charge, without warranty of any kind and might contain faults, defects and errors. Using these files for your navigation is at your own risk and responsibility. Before riding these trails you have to clarify the legal drivability of these tracks with the local authorities.

All the pass and mountain roads listed, including old, gravel and poorly preserved military roads, are classified in the Great Alpine Road Guide from Denzel-Verlag into levels of driving difficulty